“Oh, the Weather Outside Is Frightful!”

Just the other day, I was bickering to myself about the 72-degree weather we’d been experiencing, mere three weeks before Christmas.  But how else was I supposed to get in the mood for the holidays, if I couldn’t pack away my tank tops and tees; my sarafan dresses and gypsy skirts?  Wasn’t this supposed to be the perfect time for cuddling up in oversized sweaters and knee-high socks, and coming up with a slew of excuses to stay home, with one’s beloveds:  A case of marshmallow overdose?  A failure of the alarm clock due to the shift of the Milky Way?  A brutal paper cut from the wrapping of Christmas gifts?  A finger burn in Santa’s kitchen?  A sparkles attack from the unpacked box of Christmas ornaments? An all-nighter spent counting the falling stars and making wishes?

It has been pretty cold inside the house as well.  Something to do with the angle of the sun not hitting my windows.  But inside the greenhouse of my car, I could easily bring back my summer’s tradition of driving in a bikini top.  And how was it, that I was tempted to drain my battery by running the AC — this time of the year — than to sweat through my sweater dresses and tights?  to peel off my shoes and roll down all the windows?

But today, it had began to come down — finally!

While in this City, I am unlikely to see any snow for Christmas.  Instead, it would be a season of downpours for which none of us, year after year, would be prepared.  Until the first heat wave in the late spring, I would have to switch to primarily driving in the left lane due to the plugged-up gutters and failed draining systems.  ‘Tis the season:  for bad driving, perpetually broken traffic lights and potholes of gastronomical diameters.  Alas, the joy!

Still:  The drop in temperatures would be a lovely enough change.  The City’s women had already been sporting their high-heeled leather boots and quirky Uggs (mostly hated, as I’d learned, by men — no matter how much quirky).  Just the other day, I noticed some furry numbers on a tall and lovely creature with long legs and straight hair.  She was walking arm in arm with her texting companion.  He — was sporting a beanie hat and sparkly converse shoes without laces, a la David Guetta.  On top, however, the girl’s ensemble was finished off with a wispily moving chiffon dress, the color of eggnog.

“How is this winter?” I thought. 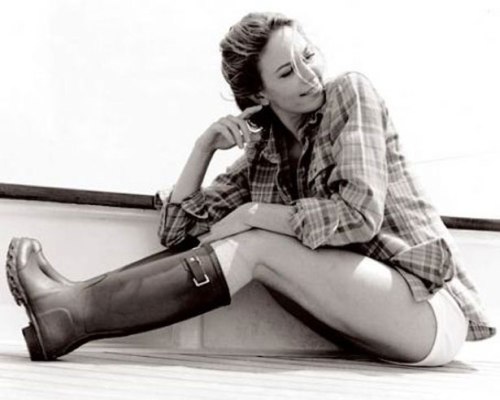 But this morning — finally! — it had begun to come down!

At first, through my dreamless sleep, I heard the traffic along the main boulevard.  I could tell LA-LA’s citizens were speeding, just a few minutes before 9:00 a.m.  (What silly creatures!  Didn’t they know about the slew of excuses that came with this season:  A cookie dough invoked stomachache?  A hoarseness after Christmas caroling?  A carpal tunnel from writing letters to Santa’s elves?)

Normally, the tires would swoosh against the asphalt quietly, like the whisper of Tinker Bell’s wings.  Or like some hooligan little wind trying to squeeze into the invisible to the eye rift in my windowsill — to gossip about the foreign coast on which it had been born.  So, unless the morning rush turned audibly aggressive with honking, police sirens or car alarms, I would sleep right through it.

This morning, though, the cars chomped and slurped as they gained speed.  And when the rain drops hit the shiny surfaces of tree leaves, on the trees right outside my window, they sounded like metallic brushes against the taut skin of drums in a percussion orchestra.  The sounds blended into a monotonous flow, and it had to be the white noise nature of them that had actually woken me up.  Having lived in cities all my life, I had been reprogramed to be soothed by the typical aggression of urban sounds.  This monotonous lullaby, however, was unlikely.  Unusual.  And, finally idyllic!

A message from a beloved buzzed my iPhone before its alarm.  From under the covers, I responded:  Love — right back at cha!  Going back to sleep was tempting but impossible:  What with all that change happening outside!  So:  I sat up.  Got up, made coffee.  Thought of which holiday excuses could be utilized today:  The too slowly drying nail polish with Christmas decals?  The scratched up limbs from the night of trimming the tree?

And while my coffee machine laboriously percolated on the kitchen counter, I peeled on my lover’s sweater and a pair of well-worn knee-high socks — and began studying the raindrops, crawling along my window.

It was really coming down.  How magical!

Posted in Love, Self

“This is the human heart,” an actress with my name was saying in a film, last night.  “It’s light — and it’s dark.”

The actress with my name was playing a Russian prostitute, and she’s got some serious chops.  She is an East Coaster, more of a European:  One of those disciplined artists, with a compassionate heart.

In a film, she is arguing with a potential john about urban decay.  He is a landscape architect obsessed with the world’s dark corners.  She, however, lives amidst them:  In a civilization collapsing on itself like a giant snake swallowing its own tail.  And somehow, she has a better grasp on human patterns than a man studying them, for a living, while being buried up to his chin in his sterile theories.

(I used to love a man like that.  Holy fuck!  He almost took me out of the game.)

“This eez ze human hearrt:  Eet eez light — and eet eez darrk,” an actress with my name was saying in a film, last night.

But all I could think was:

“Tired today.  Is this where I burn out?”

It’s been hard, living around here.  In the beginning, there were difficulties related to the mere survival:  shelter, work, learning the geography of this place.  The fucking landscape!

I would figure it all out, in less than a year — and that would be the easy part.  Because it still wouldn’t let up.  The survival would get easier, sure; but somehow it never amounted to anything.  Every day, it felt like starting from scratch:  Paying the dues.  And every day, I would feel I could just burn out, at any moment.  But giving-up — was never really an option.  So, I just kept pushing.

For nearly an hour, I sat in traffic yesternight, to get to a hood only a mile away from my own.

“Could’ve walked this fucker faster,” I thought, while crawling behind a retiree fond of riding the breaks of his Chevy.

As soon as the one-lane street opened into a turn-lane in the middle, I zoomed around him.

But then, I found myself behind an orange bus that added to the relentless heat wave with its boiling exhaust fumes.  I rolled up my windows and crawled behind it for another couple of blocks, while riding my breaks.

But giving-up — wasn’t really an option.  So, I kept riding.

I cranked up the AC.

The houses on this stretch of Hollyweird wear that used-up look of a transient neighborhood.  They serve as temporary shelters to those who come to test their luck.  But the newcomers would figure it out, in less than a year, and move to more comforting neighborhoods; taking tiny slices of whatever was left — with them.  There are a few parks here, some dodgy playgrounds.  And I wouldn’t dare to find myself walking here, at night, through this fucking landscape.

Did I just say that out loud?

I rolled down the windows again.  Might as well.

The smell of the collective exhaustion entered my car immediately, and all I could hear was the screeching of occasional breaks, punctuated by distant sirens.  No human voices here.

“I could’ve walked this fucker faster!” I thought.

On Vine, an ancient Nissan jumped out of a pathetic shopping center and into the lane ahead of me, as if it were driven by someone looking for his own suicide.  My breaks screeched.

Then, the urban kamikaze proceeded riding his breaks.  To avoid a suicidal thought of my own, I studied the dusty white building of an Armenian church.  On its stone fence, a security guard was talking to a working girl with enormous sparkly fake eyelashes.  Both were about to start their shift.

Did I just say that?

I turned into the first side street and sped up.  A lanky kid with an Afro jumped out of an alley on his skateboard.  He was beautiful.  I started riding my breaks behind him.

I parked behind a Grand Cherokee with chipping red paint, no longer glossy.  A hefty, tall man walked by, on a cracked pavement, audibly talking to himself.  He saw me looking, stopped muttering.  Gave me the middle finger.

“This eez ze human hearrt,” I said out loud, yanked the hand break and stepped out into traffic.