“The definition of growing up is that you are supposed to get better at tolerating ambiguity.” — Jeff Tweedy

Oh, but we always know what we’re doing, don’t we, ladies?  Between the hair flipping, and the chin tilting; and the swoon-worthy flutter of our lashes; the sway of our hips and the elongating devices for our legs; the belts, the garters, the built-in bustiers:  Oh, how deadly our choices can be! 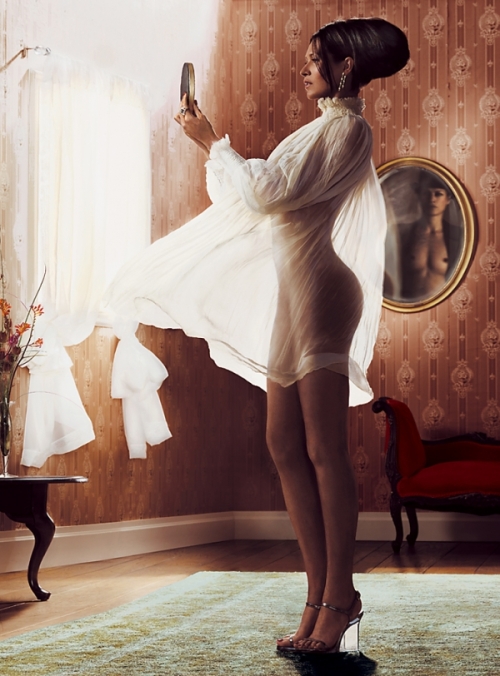 The curvature of our breasts and the narrowing slide of our waistlines rarely fails, especially if we get enough tools to accentuate the details.  The mere apothecary of our perfume-infused lotions and bottled scents is enough to send a man spinning into a life-long addiction.  Most of us are soft to the touch; and sometimes, our skin shimmers in the light.  And when the skills come out, what is a man to do?

We don’t always know why we are doing it.  Some of us do it for the money, in those jobs that hire us for the tricks.  Others do it for money in a one-on-one basis with their male victim of choice.

One of those girls who would approach every male as a conquest, leading him on for just long enough to not diminish his manhood.

One of those girls who would quickly confuse sex for love.  But sex — is just sex:  When done correctly, it can be quite wonderful; but it CANNOT be confused for anything else.

One of those girls who would feel “used” or “empty”; or god forbid, “lonely”, after all of it was tried and settled; and she would quickly suffer the consequences of her self-delusion via shame and loathing.

And I have also known those girls who always prefer the company of men.  It validates them.  So, they amputate themselves from the rest of their gender.  And it’s painstaking to watch a woman of such great insecurity navigate her way through a man’s world.  One of those girls — I have never been, so I don’t really catch their drift. But, god bless ‘em, anyway!

I was pontificating all of that the other night, as I was waiting to yield onto Hollywood Boulevard and get the hell outta dodge, on a Friday night.  It was a tricky spot located at the curb of one busy 7-Eleven.  There, you gotta deal with all the stray drivers making their stops for all kinds of irrational calls of nature.  The parking lot of the joint opens directly into a lane that merges with the 101.  So, any sucker like me — trying to make it into the second lane — better possess a vocabulary of telepathic stares and classical-conductor-like gestures, in order to bypass the other baffled and irritated drivers trying to make their way onto the fucking freeway.  And we’ve all got less than half a block to get to our lane of choice.

The clock was nearing midnight, and the entire process was slowed down by the traffic on the opposite side of the street where a newly opened club’s parking lot was swallowing and spitting out expensive cars on a second-by-second basis.  The penguin uniforms of the valets were slipping in between traffic, on both sides of the street; and the cars kept on coming out of the 101 off-ramp and taking their place in the miserable congestion.  The rules didn’t seem to apply to that particular demographic of drivers, and every once in a while we would be made privy to some impressive U-turns and parking tricks.

The head of a giant, spinning spotlight machine was happening in the background of all that circus.  For a few minutes there, I was mesmerized; and a honk by a middle-aged man in a rickety Honda got my attention:  He was waving me in while granting me one of those same telepathic gazes.

(Oh, and then, I waved again, in between my two seats, to make sure — that she was sure — that I was very grateful.)

Now, trying to bypass the freeway traffic, I turned on my left blinker and began waiting for someone else to let me enter into the middle lane.  But the sight of two honeys trying to cross ahead diverted the best of my attention again.

They were both tall, brown and gorgeous.  One was wearing a flowing baby-doll dress of canary yellow (and I respect any woman who can pull off that color).  But regardless of her appeal, it was her girlfriend that I could not stop watching:  In a skin-tight little black dress that barely covered her glorious behind, she was trying to lead the way, in a pair of transparent stripper heels.  A couple of times, she would step off the curb into the merging lane and attempt to make her way across.  But after a few more steps, she would get scared and scurry back to the curb, while pulling down the non-existent bottom of her dress to cover the spillage of the ass.

I got awoken by a honk on my left:  A kind woman in a black Land Rover was waving me in.  I wondered if I was the only one spacing out on the girls.  Perhaps, their choice of attire failed to seduce the rest of the angry Hollywood drivers; and I as began navigating at a much more favorable speed, I wished them better luck for the rest of the night.

But I also felt grateful:  for having grown out of being — one of those girls.  For giving up on this chronic dance of ambiguous seduction and promises that can be prolonged enough — to be broken or misconstrued.  For learning how to sit and live in my own perfectly soft skin.  For knowing how to hold the ground with my womanhood that finally had absolutely nothing to prove.

Yet still, I couldn’t stop thinking — about those girls.

Posted in Love, Self, Sex, Women